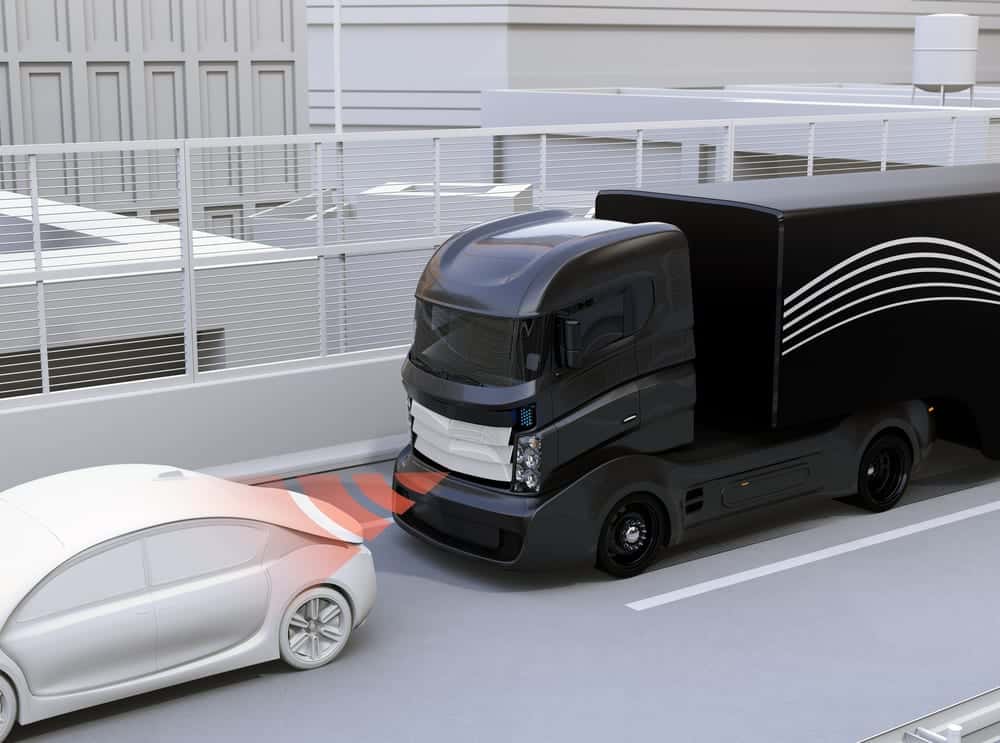 When a tractor-trailer enters the roadway, drivers know to move out of the way. These large trucks have an enormous presence, and they can be extremely dangerous if involved in an accident. Truckers spend their entire day weaving in and out of roadways and traffic making sure that the country’s shipments arrive on time.

Trucking is the heartbeat of the United States.

But self-driving truck companies are changing the trucker’s future prospects for the worse. Trucking may soon be an industry that is primarily driven through automation and artificial intelligence.

There’s a good chance that you’ll look over one day in utter fear as a tractor-trailer whizzes by with no visible driver in sight. It will seem as if the big rig is being driven by a ghost, and while this may not be true, it will be a change that a lot of people need to get accustomed to in the near future.

There are companies propelling the self-driving truck into reality.

And you might have never heard of these behemoths before. What companies are working to change the world of trucking as we know it? 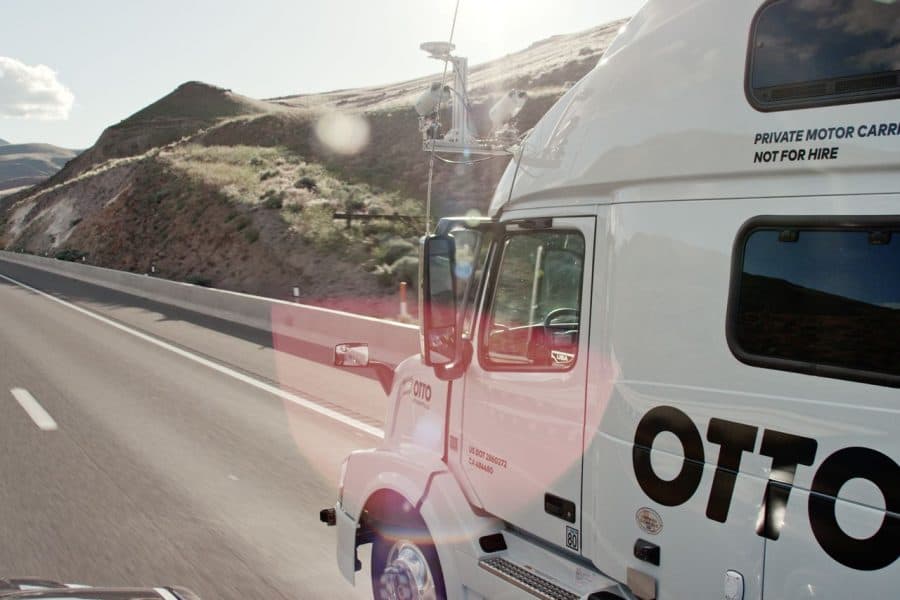 If you’ve been living under a rock, you might have never heard of Uber before.

The company has already transformed the taxi industry by offering on-demand rides and the ability for anyone with a nice car and a good driving record to make money as a taxi driver.

But one thing you might not know is that the Otto self-driving truck is also a part of Uber.

Otto is a company founded by a group of high-end tech professionals that left their corporate jobs and started Otto. The company aims to be able to outfit trucks with self-driving technology for just $30,000 – far less than a trucker’s salary.

The company was acquired by Uber for somewhere near the $680 million range, and it has since pushed the company forward.

Where is the company at now?

The company completed a 120-mile trek to deliver 50,000 cans of beer from a brewery in Fort Collins to Colorado Springs. The vehicle trekked along at 55 miles per hour and did go on Interstate 25. A driver was behind the wheel to merge onto the interstate, but he soon hit a button and let the vehicle take control of the driving.

Otto’s technology isn’t up to speed yet, so it can only run on the highway where there are less variables at play.

Otto expects trucks to get to the point where the only time humans drive them is in the last stretch of the road off the interstate, effectively becoming harbor pilots in the process.

The company will be working on additional tests and allow the tech to be developed so that the vehicles can be driven completely without human intervention.

Embark is a self-driving startup, and the small venture is turning heads in the industry. The company, backed by Maven Ventures, is based on the same premises as Otto. The company will allow drivers to drive the truck on to the highway before they can move into the cabin and let the truck do the rest.

The idea is that the technology is not available yet to deal with the variables in a city: people running across the road, multiple intersections and the like.

And the company has already gained approval in Nevada to test the semi-trucks on public roads.

Trucking has become the company’s main focal point, as it has a far higher potential to be commercialized. And highway driving, once entering the interstate, is far less complicated than driving on city roads.

The startup is testing and revising their technology in hopes of commercialization. 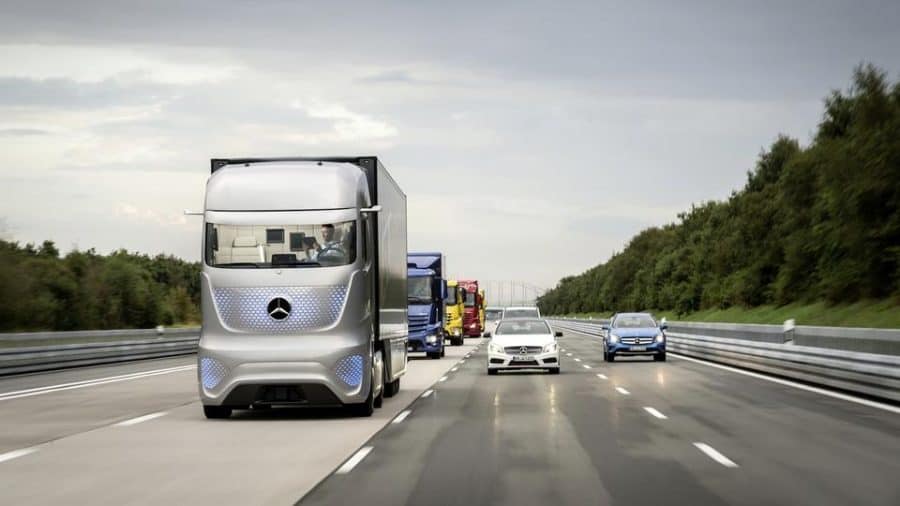 Yup, that same Mercedes that people love is also working on the long-haul truck of the future. The company’s large cash stockpile and technology already implemented in vehicles allow it to have an advantage over the competition.

Mercedes has a more realistic timeline for their vehicle to be available: 2025.

But the company has completed its first self-driving journey across Europe. The challenge included several autos, and Mercedes was part of the convoy that drove from Maasvlakte to Sweden, Denmark and Germany to clock over 2,000 km before reaching its final destination in the Netherlands.

But the trucks only used this method of driving when congestion levels were low. There are human drivers in the rig to ensure everything goes smoothly.

Vehicle-to-vehicle communication is present in the vehicles to reduce error, and the machines use a form of hive mentality to ensure that it makes the proper decisions on the road.

Daimler was among the trucks to ride across Europe with Mercedes, and the company also uses platooning to make its way across countries. This is the world’s first driving semi-truck, and the company hit the road well before the competition: May 2015.

The company’s technology is driven through Highway Pilot on their Freightliner trucks.

Unveiled a year before Mercedes, these trucks have been approved for use on public roads, and have been in development longer than the competition. The “Inspiration Truck” was the first truck to be licensed for road tests, and it’s able to detect objects and lane markings to better drive along roadways.

A Highway Pilot is still needed to sit behind the wheel and put the truck into autonomous mode when the sensor indicates that there are clear markings.

The test vehicle alerted the pilot to regain control of the vehicle 20 seconds before twists and turns. This was during the truck’s first test, but we expect this to be a thing of the past as manufacturers perfect the technology.

While Daimler is a separate company from Mercedes, they’re the parent company of the brand, so it’s safe to say that the companies will merge their technologies if necessary in the future. Daimler sells vehicles under the Mercedes and Smart brands.

Starsky Robotics is an interesting name to enter the list, but this company may have the answer to that final stretch of road that requires pilots to jump behind the wheel and take control of their big rig. The company views itself as a last-mile solution, and this is done through a remote control system for self-driving trucks.

What this allows is a trained driver to take the wheel via remote control.

It’s an interesting technology, and it works through onboard robots that will take control on local roads. Truckers would be able to sit back and stay much closer to home while still controlling the end journey that is required using current driverless technology.

The company already tested their tech using a Freightliner Cascadia, which hauled 5,000 pounds of freight some 120 miles before the remote control system took over for the remaining 20 miles of the ride. The robotic system pushes on the brake, hits the gas and moves the steering wheel all on command.

The vehicle will even switch gears on command.

Experienced drivers just sit back and control the vehicle remotely until it reaches its final destination.

Starsky will fill the gap that has been hindering those initial and ending miles that require an on-board pilot to take the wheel of the vehicle.

The size and weight of a semi-truck adds an entire new level of complexity for self-driving, so we can expect to see self-driving autos on the road before we see actual semi-trucks. But trucking companies have a lot more potential for commercialization, which may result in more money being funneled into research and development to get big rigs on the road, self-driving faster.

In either case, it’s safe to say that within in the next 10 years, self-driving semi-trucks will take over the roadways, making them inherently safer to drive on.