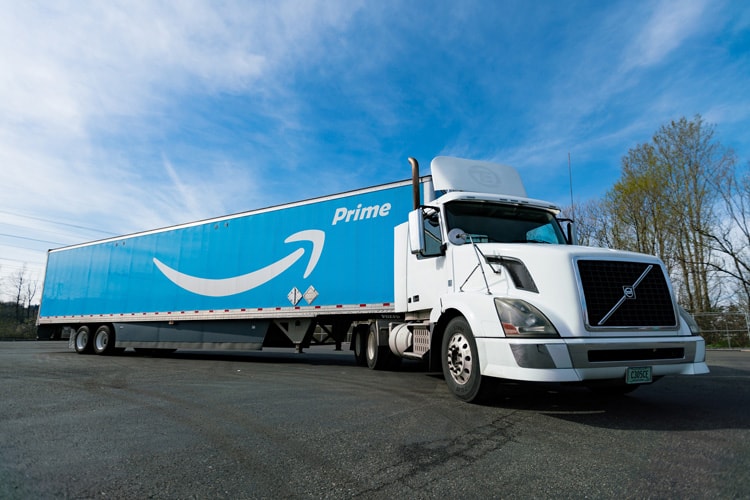 As consumers, we have grown accustomed to Amazon disrupting industry after industry. Retail, cloud computing, groceries and more.  Now they have their sights set on the transportation sector with the introduction Amazon Freight Brokerage in April 2019.

Amazon has the resources to disrupt an entire industry, but can the retail giant really take on freight brokerage?

The company announced that they would move from free two-day shipping to one-day shipping for Prime members. Prime members will receive their orders a day earlier, but the announcement also came with bringing freight.amazon.com live.

One surprising aspect to this news is that Amazon has done little to promote Amazon Freight.

The company has not publicized their Freight company, nor have they provided a press release with information on the platform.

How Does the Amazon Freight Brokerage Service Work?

Amazon is a shipping company with its own shipping brokerage and capabilities. The company is going to sell these services to other companies because it has mastered the brokerage industry. The platform is everything people love about Amazon, but it’s for the freight industry.

The company isn’t running their own vehicles, but they’re brokering access to their own trucking network.

Anyone using the platform will gain access to 53’ dry van full truckload freight without marking up the price.

If you ever paid attention to Amazon in the early days, you knew that the company offered low prices with very little profits. The company didn’t turn a profit, but they were taking market share from some of the largest retailers in the world.

The same tactic is being employed with Amazon Freight.

Amazon trucking contracts are already in place. The company is granted discounts because they have a massive volume of products that need to be moved. The company’s contracts are in place, so they can afford to offer cheaper prices on freight. Haulers are still paid the same rate because of their contracts with Amazon.

If a dry van isn’t at capacity, Amazon Freight can offer the space at a discount with no markup without incurring any extra fees in the process.

Amazon is connecting its network of truck carriers with its distribution and sortation centers. The company will be able to take market share without worrying about profits. The volume that Amazon moves daily has allowed Amazon to build out its infrastructure to offer it to others.

This is the same move that Amazon followed with its cloud computing operations.

Amazon will be able to offer cheaper prices, attract new companies to its brokerage and do it knowing that rival brokerages will not be able to compete. Amazon doesn’t need to markup prices, but brokerage firms rely on these markups to compete.

Rates in the trucking and brokerage industries will need to come down for anyone to be able to compete with Amazon.

Amazon will capitalize on Amazon Freight, and this goes beyond eventually pulling a profit from the service. The company may force lower prices across the board, which will lower Amazon’s overhead as a result.

If Amazon doesn’t force prices down, the company’s freight is discounted at a 25% or higher rate.

The company can offer a 15% discount instead and profit off of it. Either way, Amazon’s massive shipping demands have allowed the company to enter another new market: freight brokerage.

Amazon will be able to lower its own prices.

In the worst-case scenario, Amazon will be able to show vendors that they have an even higher volume that needs to be fulfilled. The company’s freight brokerage may allow Amazon to demand lower prices because the company can start negotiating even cheaper rates with vendors due to higher volumes.

Amazon will be able to turn part of the company’s cost into profits.

You have to also look at Amazon’s financials to understand this move even further. Amazon is still growing, but growth is at a slower rate because the company has a large market share already. One key method to continue to grow revenue will be cost-cutting measures.

Cutting the cost of freight, whether it’s through negotiating new discounts or profiting from the distribution network, will lead to higher revenues. Investors demand continued growth, and Amazon Freight may be the key to Amazon’s future growth.

Top-line revenue growth was near 30% or higher just three year ago, and this figure is projected to fall below the 15% mark this year.

Discounts are 33% from Albany to Washington, DC and 32% for Baltimore to Maryland. The discounts are too steep for brokerage firms not to realize Amazon as an immediate threat. Annualized shipping costs are $87.6 billion for Amazon with a majority of those costs incurred during the holiday season.

The move would push many holiday shoppers to Amazon because the company will have the ability to meet the demands of consumers that the competition can’t match.

Fast shipments, no delay in anyone receiving gifts during the holiday season and all without the need to spend any extra capital is a recipe for success for Amazon.

Amazon is going to disrupt the freight industry, and even if the company never profits from Amazon Freight directly, increased capacity will allow the company to reap higher profits during peak seasons.