Decker Truck Line has built their business on the back of valuing their customers, and the value starts with truck drivers. The company first opened their doors in 1931 when the founders, Loren Decker and Dale, his younger brother, used their Model B Ford to haul goods, including windmills, plumbing fixtures and canned goods, to surrounding states.

The brothers worked on the business together until 1976 when Loren sold his interest to his brother and his two nephews.

Dale’s son, Don Decker, took full control over the company in 1993 and has helped it maintain the values that his uncles and father built their company on.

Decker Trucking offers a variety of trucking positions to their drivers, such as:

Company drivers are valued with Decker, and this starts with competitive pay, a great working environment and excellent benefits. The company also prides themselves on offering superb equipment so that their drivers are always safe on the road.

Drive directly into your career with Decker.

The great starting pay is also accompanied by:

When applying for the company, drivers must be the following requirements before being considered for the job:

Family owned, the company offers ample room for growth and pays their employees well. These are the complaints that every company has, and the work environment is very demanding, as are all trucking environments.

Diving deep into Decker Truck Line reviews, we can learn a lot about the company and how they operate.

The company’s Indeed profile allows drivers to leave reviews on their salaries, and there are tens of thousands of reviews that allow potential drivers to have a better understanding of their expected pay range.

Decker Trucking positions pay 8% above the national average, with the average salary being $67,719 per Indeed.com.

The trucking industry has a wide range of salaries, from the high $30,000s to some making nearly $107,000 per year. The problem is that the listings don’t state the amount of experience the drivers had to fully understand the salary differences.

When viewing salaries, you can see what the employees are saying about the company, including:

You even see some industry veterans with over 38 years of experience leaving feedback stating that this is a great company to work for. The biggest complaint, which is common in the industry, is that you practically live in your truck.

Drivers are very rarely at home, so having a personal life is very difficult but this goes with any long haul position.

Solo Drivers are reporting that their salary is $67,555 on average, which is a very respectful salary. The range also goes from the mid-$30,000 up to the $106,000 range. The salary figures seem to be exactly the same as regional driver, so this can be any solo driver with the company apparently.

Owner Operator figures seem to be inaccurate from an outside perspective, but this may be due to the owner operator only picking up a few loads with the company. The average O/O salary listed is $59,948, with a top end of $90,000.

Any owner operator must assume that there is inaccuracies with these posts due to the lower salary.

The review that’s listed states that the company is great to work with, but that you’ll be out on the road for 10 – 14 days before your 2 days of home time. This is a rough schedule for all drivers, so it’s something to consider when working with the company.

We can also piece together some other information about the company by viewing the reviews:

Drivers rarely complain about mileage and pay when working for Decker.

Everyone seems rather content with the money they make and the miles they run. The company, for the most part, seems to respect their employees, and some drivers from more recent reviews state that the company will respect home time requests.

The company does their best to ensure that drivers are given the latest equipment to do their job properly. The company has new trucks every three years, so drivers are always put into rigs that are reliable, safe and fun to drive.

Dispatch is supposed to be great, but this depends on the terminal.

Whether you own your own truck or are looking for a company driving job, Panther Trucking has opportunities for both new and experienced drivers. But the company does things a little bit differently. As a driver – whether you’re an owner operator or fleet driver – you’ll be treated as a contractor (more on that…

Crete Carrier has been in business since 1966 and is one of the largest private trucking companies in the United States. Crete offers both company driver and owner operator positions, which gives truckers the freedom to choose the trajectory of their career. The company boasts an industry low turnover rate and competitive pay. While this…

Lazer Spot started as a small operation in 1996, and it has experienced steady growth since opening its doors. Over the years, the company has expanded its operations, but the team’s commitment to customer satisfaction has never wavered. Lazer Spot Services Today, Lazer Spot is a leading yard management provider, with more than 400 sites…

Founded in 2004, P&S Transportation is one of the fastest growing companies in the flatbed truckload transportation industry. Based out of Birmingham, Alabama, the company specializes in flatbed freight with services offered throughout the Northeast, Southeast and Midwest. P&S has a reputation for treating their drivers with the respect they deserve, which makes them an… 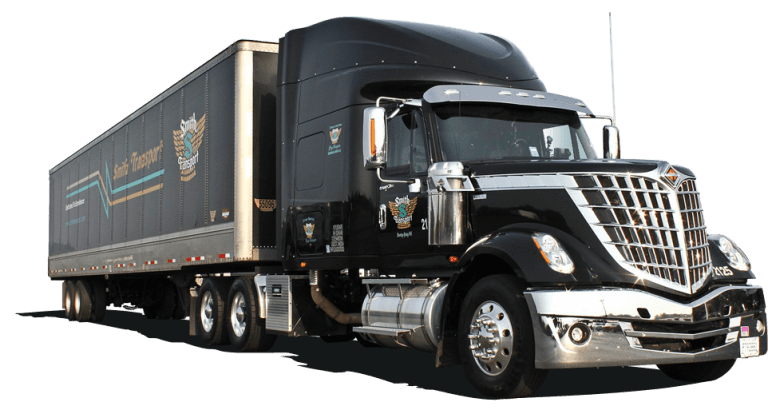 Smith Transport was founded by Mr. Barry F. Smith who started his own career at the age of sixteen. He started contracting with local dairies in the region and began hauling milk and cream to customers. He started his career as an independent contractor at the age of eighteen.  The business has evolved since then…

National Carriers is the “Elite” fleet offering opportunities for company drivers and owner-operators. Offering services in all 48 states in the continental United States, the company offers a robust set of services, including: livestock, refrigerated and logistic services. You’ll be able to choose between two main National Carriers trucking jobs: company driver and owner-operator. National…